Paradoxes and Ironies of the Audio World: The Doctor Zaius Syndrome 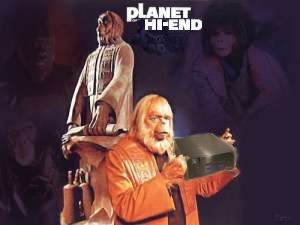 When the truth is so terrible that admitting it would surely make the whole system crumble, ape logic demands denial and coverup.

Have you ever seen that marvelous 1967 science-fiction movie The Planet of the Apes? If you have, you will recall that it depicts a planet of the future where English-speaking anthropoid apes are the rulers and humans are speechless beasts of burden, enslaved by the apes and despised as a totally inferior species. The apes have horses and guns but no real technology. Doctor Zaius, the subtle and highly articulate orangutan who is this society's "Minister of Science and Defender of the Faith" (he is played by the great Maurice Evans), knows something the other apes do not: that humans in a past era possessed not only speech but superior technology, flying machines, powerful weapons, and so forth, all of which served only to bring about their eventual downfall and reduce them to their present condition. Doctor Zaius fervently believes that any knowledge of this truth about humans would totally destabilize the society of apes and result in the end of
their world. The ape dogma he fanatically protects, even though he knows better, is a blatant denial and coverup of the actual history of the vanished human civilization and a paean to the eternal superiority of the ape.

I won't give away the rest of the plot to those of our readers who haven't seen the movie and may want to, but doesn't Doctor Zaius resemble certain key figures in the high-end audio community? He knows the truth but it's bad for the establishment. The system would come crashing down if the truth were revealed. To pick an obvious example, consider John Atkinson, the subtle and highly articulate editor of Stereophile. Don't you think he knows? Of course he knows. But if he admitted that $3000-a-pair speaker cable is a shameless rip-off or that a $7000 amplifier sounds no different from a $1400 one, the edifice of high-end audio would begin to totter-or so he thinks (and may quite possibly be right). Consequently, he spouts convoluted scriptural arguments and epistemological sophistries, just like Doctor Zaius, in order to pervert the obvious, uncomplicated, devastating truth.

There is a perfect illustration of this process in the August 1994 issue of Stereophile, where Zaius-Atkinson once again bashes blind listening tests in an "As We See It" editorial. Such tests are of course considered extremely threatening by a publication that reports night-and-day differences in sound which absolutely nobody can hear when the levels are matched and the brand names concealed. He brings up all kinds of intricate flaws and drawbacks that may very well exist in some blind tests but turns his back on the large number of blind tests in which all of his objections have been anticipated and eliminated and which nevertheless yield a no-difference result every time. He knows very well, for example, that no one has ever, ever proved a consistently audible difference between two amplifiers having high input impedance, low output impedance, and low distortion, when operated at matched levels and not clipped-but like Doctor Zaius he conceals that knowledge. He'd rather collect rare case histories of screwed-up blind tests than deal with the vast body of correctly
managed blind tests that undermine the Stereophile agenda. (Just for the record, I'll state for the nth time that there are only two unbreakable rules in blind testing: matched levels and no peeking at the nameplates. To eliminate "stress," take a week or a month for each test, send everybody else out of the room, operate the switch yourself at all times, switch only twice a day-whatever. The results will still be the same.)

Our columnist Tom Nousaine, in a recent conversation with me, stated his belief that any longtime audio reviewer who has tested hundreds of different audio components over the years knows exactly what the truth is about soundalikes because it is utterly impossible to escape that truth after so much hands-on experience. It asserts itself loud and clear, again and again. Therefore, he argued, the audio journalists who invariably report important sonic differences are most likely a bunch of hypocrites, i.e., exhibit the Doctor Zaius Syndrome. I was strongly inclined to agree with him...

Why do I even bother to tell you all this? All of our readers who have been with us for more than just one or two issues are aware of my enormous frustration on the subject of scientific truth in audio. The very idea of a Doctor Zaius Syndrome, even it's only a parody, suggests the existence of antiscience in audio as a tradition, not just a momentary aberration-and a tradition it is, going back to the early 1970s, at the very least. In the late '40s and throughout the '50s and '60s, whatever the most highly qualified and experienced engineers said about audio was the accepted truth. Then came postmodern irrationalism, post-Watergate anomie, fortune tellers in high places, pyramid power, Jesus-haired record-store clerks as self-proclaimed audio experts, untutored high-end journals, pooh-poohing of engineering societies, derision of degreed academics-the B.S. era of audio (and I don't mean Bachelor of Science). Today, the melancholy truth is that tweako cultism has become mainstream audio, at least above a certain price range, and engineering facts are regarded as disturbingly radical or at least eccentric. The scientific audio community has been marginalized.