On april 28th thru may 2nd, we all gathered once again to celebrate our annual meeting ("Molingordo IV") in Somolinos (Guadalajara, Spain), and as usual, we conducted all sorts of tests and measurements to each and every piece of gear that each of us brings along, both DIYs proyects and commercial products of all sorts, a great oportunity for everyone, the initiated and the newcomers, to participate and learn how to conduct a DBT, experience how our own gear performs when measured, experiment with all sorts of gear and have fun at the same time, in a relaxed and friendly atmosphere for the entire family (yes, we do have daylight activities for the family and night entertainement for the understanding wifes that comes along for this 4 day non stop event).

On this edition, we have varied the method of the test (DBT) to eliminate surrounding circumstances that might devaluate the outcome or be subject of criticism from the subjectivists. In fact, the test we relate to below is not based on the Matrixhifi testing protocol but even so shows as a result very interesting and conclusive outcome.

Common for both systems:

The human testers were all trained ears and used to extensively listening to high end equipments, a good number of them participated, each with his own conception of the high end world, some totally subjectivists, some completely objectivists, some in between.

(This is the beauty of this event, we are all toghether sharing our experiencies and visions around this hobby) 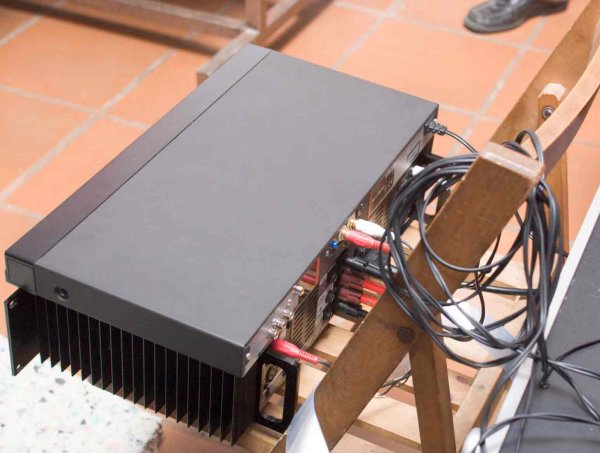 The (A) system seen from the rear. Note the high end audio rack used...and the carefully placed 15' RCA cable... 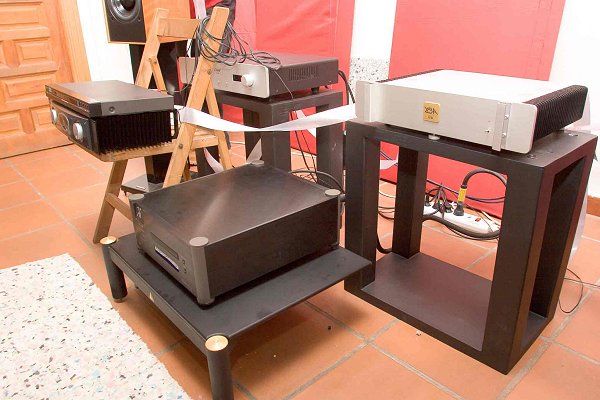 General view of both systems. As shown here, the expensive and sofisticated one had all the advantages available. 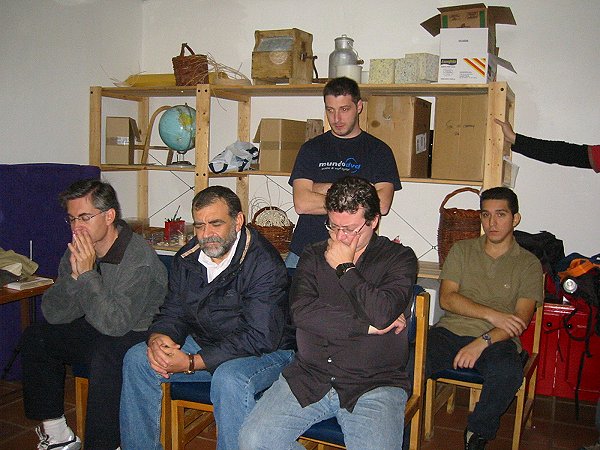 Some of the participants of the test...concentrated they were !
(Important note: not more than 2 testers were allowed simultaneously, to avoid noise and concentration breaks) 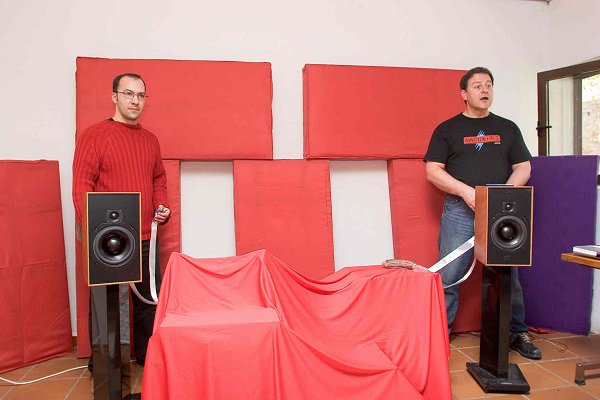 The "HABX" (*Human ABX*), ready to swap systems at will of the testers.
Note that we eliminated our own ABX control box, more about this below.

The systems were placed into a listening room with dimensions that could be similar to those many have at their homes (mind you US readers, this is Europe, real state is amazingly expensive and a typical home will have around in between 20-30 sqm, some youngsters living at their parent's home won't have a room much larger than 15sqm)

9 absorbing panels (Matrix in house made) were placed strategically around the room, wich had some loosen furniture that could emulate a standard home. The ceiling is covered by glasswool. We understand that this treatment is far more than what most of us can achieve at our homes, WAF considered...

In one of the systems there was reproduced some music and determined the adecuate SPL for the test, then, using a multitone found on our Matrix CD test 2.0 the output voltage was measured at the loudspeaker's terminals, then, the other system was adjusted by means of measuring the voltage to finally achieve the same output level on both systems. This eliminated the potential SPL difference that coud bias the test.

We then placed on each CDP the same music chosen either by the testers or at random, again with the blessing of the testers.
The HABX (Human ABX'ers) swaped systems at the will of the testers, whenever they wanted, going from A to B, knowing the testers at all times what they were hearing (A or B) but without knowing what system was A or B. That is, no random DBT secuence was used.

In order to avoid biasing outside the testing room, we took the license to swap the names of the systems from A to B randomly, so nobody knew wich system was playing when listening to the A or B. However, we kept track at all times for each session wich was each system and registered this on paper to gather the information needed for the conclussions.

Under the conditions described above, all kind of musics were played (female or male voices, pianos, disco music, orchestras, etc) until the testers could be ready to choose one of the systems as the best sounding, pointing at the A or B as their choice or simply not choosing anyone from the other, wich was then marked as "X". The testers could at all times ask for a swap from one to the other at any time and spend as much time listening to each system and/or each musical passage at will. 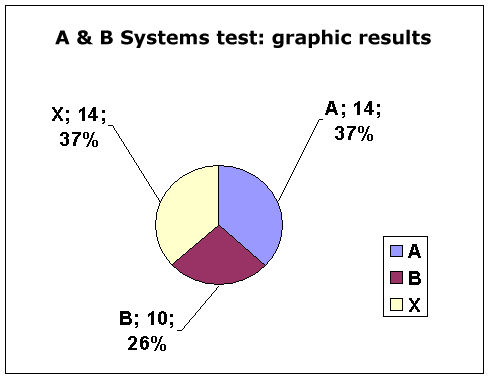 We are convinced that the best way to identify differences in between systems (or individual equipment parts) is by instant commutation. However, some people challenges the use of an external ABX box (usually by people unused to conduct DBT's) arguing that the use of a commuter like the ABX might modify or flatten the response of the systems, masking the differences they so easily claim to hear at home or at an audio store (or even at some shows).

This challenge does not hold water, as we can see from the measurements conducted to the ABX we use:

However, and inspite of what we know, we have modify the method to avoid using the ABX box. This is the sole and only reason for the use of the "HABX" (Human ABX) by changing the speaker cables.
Another argument used against DBT's is that testers feels pressed by the surroundings or that time is not sufficient to identify wich is the system or piece of equipment subject of testing.

Well, to avoid being subject of such arguments, we have gone from the usual DBT questioning "wich is the one"? to "wich one you like best"? This should eliminate the pressure that so often is called upon to demerit the use of DBT's, furthermore, on this occasion there were not preagreed a max listening time, and each listener/tester could use the music of his choice.

The results speaks by itself:

How can it be possible that a basic system with such a price difference against the "reference" one, poorly placed, using the cheapest signal cables found, couldn't be distinguished from the more expensive one?

And, most of it all, how come the cheap system was chosen by so many people as the best sounding of the two?

Shouldn't the differences be so evident that it'd be a child's game to pick the best?

Well, we think that each can reach to its own conclussion... 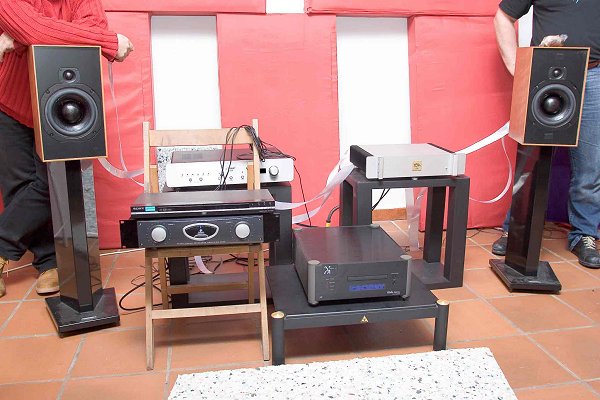